Upset City: Just when Kansas State and Oregon thought it was safe to drive on their roads to the  National Championship game, Baylor and Stanford threw up road blocks and hard.

By now we all know The Wildcats (upset by Baylor 52-24) and the Ducks (upset by Stanford 17-14) have been taken on a detour to their new BCS destinations…one of the four other BCS Bowls. So, with that said, here’s a look at the new top four in the BCS Standings:

Both Kansas State and Oregon fell out of the top four and are now sitting and sulking in their new BCS spots. Oregon is now ranked fifth with K-State ranked sixth. As mentioned in my last BCS article, this is exactly what Alabama and Notre Dame wanted to and needed to happen, in order for a shot at the title game.

With the upsets to K-state and Oregon, Notre Dame simply has to beat USC and their a lock for the title game. Bama meanwhile, just needs to beat Auburn and defeat either Georgia/Florida in the SEC championship game at seasons end. If Notre Dame and Bama win out, they will finish as the number one and number two ranked teams in the country and will play for all the marbles in Miami.

BCS Bowl Breakdown: With such a seismic shift in the BCS Standings, here’s a look at the new BCS Bowl Series Projections as predicted by ESPN’s Mark Schlabach and Brad Edwards:

2. The Rose Bowl: Nebraska vs Stanford (picked by both)

5. Discover Orange Bowl: Florida State vs Rutgers (picked by both)

Here’s a link to the other bowl projections: http://espn.go.com/college-football/bowls/projections?season=2012

Final Thoughts: Seeing as I’m now 0-2 in calling the BCS National Championship outcome, I’m just going to leave it up to the fans on this one. What do you think will happen? Who do you have winning it all? Leave a comment below.

According to many sources, Kansas Jayhawks’ forward Thomas Robinson will announce his intent to play in the NBA later today.  This is no surprise to anyone, and he is #4 on the big board for ESPN. Robinson has decided to not return to Kansas for his senior season.  As a Junior, Robinson averaged 17.9 PPG and 11.8 RPG, before losing to Kentucky in the Finals a w

eek ago.  Robinson didn’t even start his Freshman or Sophomore years, averaging at most 14 mins per game.  Last year, however, he averaged over 31.  He is a great defender and a force on the boards.  Good luck Thomas!

If you look at the box score of last night’s NCAA Championship Game, you may see a kid that shot 1-10 and scored a total of 6 points has won the Most Outstanding Player award.  However, if you watched the game, you would have seen a Bill Russell-like defensive minded player completely changing the pace of the game.  Anth

ony Davis was not concerned about the offensive side of the game, he even told his teammates that he would just focus on defense and rebounding.  He had 6 blocks and 16 rebounds. Doron Lamb was the games high scorer with 22 points.

The game looked to be over almost right away, until the last 5 minutes when Kansas put together a small come back. However, they could not make up enough ground and they lost 67-59. Thomas Robinson had a great game with 18 points and 16 rebounds. Tyshawn Taylor added 19 points of his own for the Jayhawks.  The best team actually won this year, which you cannot always say at the end of the Madness.

Although it has already been around the rumor mill since last weekend, it has now become official: Austin Rivers is heading to the NBA.  Rivers was a unanimous choice for ACC Rookie of the Year.  Usually, I would disregard anything about Du

ke, but since it is the son of Boston Celtics coach Doc Rivers, it is hard not to say something about.

Most people, including myself, thought that Rivers would last at least a few years at Duke, who are known for graduating most of their players, but not in this case.  He will become the 4th Duke player to leave after only one year. Kyrie Irving did it last year.  I also thought that Doc would push his son in the right direction.  However, he had this to say:

“At the end of the day, all you can do with all of your kids, or any kid in this situation, is give them as much input as you can, then you try to let them make the decision. They have to make it; you can’t make it for them.”

Don’t get your hopes up, though, Celtics fans.  Chances are, he won’t make it till our pick.

We all know that there has been a ton of speculation regarding freshman sensation Anthony Davis of Kentucky.  He is an amazing player.  However, there are 4 other players on the All-American team that deserve a closer look too. For example, Thomas Robinson of Kansas was the first unanimous choice since Blake Griffin in 2009.  Davis was not unanimous somehow. Here is a look at the 5 All-Americans:

If you somehow missed any of the games this weekend, you missed quite a bit.  The box scores do not do these games justice.  Especially in the Kentucky game.  Baylor went up 10-5 right out of the gate, but that was short lived as the Wildcats came back and exploded for 16 straight points.  The final score was 82-70, but it was much more lopsided than that.  Kentucky is going to be a tough team to beat.  Anthony Davis is going to be the #1 pick, and for good reason.  He played amazing once again with 18 points, 11 rebounds, and 6 blocks.  He even played when the game was a lock at the game, risking injury.  This team looks amazing day in and day out.  They will take on Louisville who they already beat by 7 points on New Year’s Eve.  I think this should be an easy win for Kentucky but you never know with Rick Patino on the other side of the court, he just needs to come up with a game plan to shut down 4 of the best players in the league.  Easier said than done.

Kansas is tough as well, with most likely a #2 pick Thomas Robinson scoring 18 points and Tyshawn Taylor dropping 22 points, 6 rebounds, 5 assists, and 5 steals.  They were able to take down the Tarheels with a strong finish to the 2nd half.  They will take on Ohio State who is led by Jared Sullinger, coming off a big game against Syracuse.  He has 19 points while grabbing 7 boards.  I picked Ohio State to win last year but I think that Kansas will take this one.

Since UConn has been my favorite team since I can remember, I figured it would be a good idea to write an article since everyone is talking about their back-to-back wins, just as they did last year en route to a national championship.  They ran over Depaul, which they should every day of the week, and then barely snuck by West Virginia yesterday in overtime.  This was due largely in part to Shabazz Napier’s 26 points and Jeremy Lamb’s 22 points.  Luckily for the Huskies, WVU only shot 34.7% from the field.  They did, however, out-rebound UConn 40-24.

Next up is their toughest test.  They will be taking on #1 in the Big East Syracuse. Syracuse has been chosen by many, including me, to win the Final Four.  As much as I do not think UConn can beat the Orange, I will not count them out completely b

ecause I began to do that last year and we all know how that turned out. At the beginning of February, UConn got blown out of the water by them 85-67.  However, by the end of the month, they only lost to them 71-69.  I think it is possible for them to stir up an upset but is going to be tough.  I mean this is the same team who has lost against Providence and Rutgers, both awful teams.  Maybe we will be lucky enough to see another 5 overtime game like last season.   Unfortunately, the Huskies are missing one key component from last year’s team—Kemba Walker.

#6 UNC opened up with a 48-24 halftime lead en route to beating #3 Duke to claim the ACC title on Saturday night. Duke shot an awful 41.3% from the field while UNC shot nearly 55%. All of the Tar Heel’s starters finished with double digits in points.  Tyler Zeller dropped 19 and grabbed 10 boards while John Henson contributed 13 points, 10 rebounds.  Sophomore Kendall Marshall scored a game-high 20 points while adding 10 assists.  The Tar Heels out-rebounded the Blue Devils 42-22.

#1 Kentucky easily handled #13 Florida to finish 16-0 in the Southeastern Conference.  They finished at 30-1 during the regular season.  Anthony Davis had an incredible night shooting (9-13) for 22 points while grabbing 12 boards and 6 blocks.  Terrence Jones also played well for the Wildcats with 19 points.  Florida shot a perfect 11-11 from the free throw line but only shot 38.2% from the field. 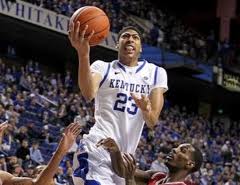 In case you didn’t already hear, this weekend is going to be huge for college basketball.  It is coming down to the wire, with only 9 days left until selection Sunday.  Some teams need a nice boost while others look to hold on to their number 1 seeds while playing other ranked teams.

*Click on any blue links below to see a small preview about their team!

**Also vote on our poll for player of the year! It’s neck and neck:  Thomas Robinson vs. Anthony Davis

Now I usually don’t believe that the number 1 seed is always the best team, but in this case it’s hard to against Kentucky. Especially with the way they went off against Georgia during their senior night on Thursday.  I really feel like they are the toughest team in the league and should run right over Florida.

UNC and Duke is going to be the game of the year.  After their last game, which was like an NBA game, you can expect the very best from both teams.

Just as I did the past few months, I am going to ask the tough question.  Who should be crowned College Basketball Player of the Year?  A few of the big preseason names have fallen off in the past few months.  Therefore, the race is basically down to two people: Anthony Davis (See team preview here) and Thomas Robinson (See team preview here). Head to head, this pick is going to be a tough one.  In fact, some ballots will be conducted next week on this subject, but we still won’t find out for a while. Here are some stats for ya: 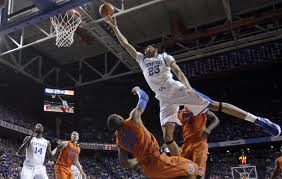 They average the same exact minutes per game and their stats are very close.  Even in the ballots conducted every week, they are within 3 points of each other (Davis is ahead).  I feel like Anthony Davis has a better team around him but at the same time, that should make it even tougher to put up numbers like he has since they have more than one or two stars on their team.  What do you guys think?