In honor of Valentine’s Day, the ladies of BSB are celebrating the top five hottest couples in sports. Here we go!

5. Mike Fisher & Carrie Underwood – Having celebrated their first anniversary in July 2011, these two might still be in the honeymoon phase but Carrie’s career would skyrocket if Mike cheated- it worked for Adele right?

4. Anna Kournikova & Enrique Iglesias – Rumor has it that this couple has been on and off for 10 years. Could it be his music that is keeping this couple together?  Baby, I like it.

3. Lamar Odom & Khloe Kardashian – How could we not mention these two love birds? Kimmy K might not have fared well but Khole and Lamar are making it work. However, would it be surprising if they broke up tomorrow?

2. Tom Brady & Gisele Bundchen – I admire Gisele for speaking her mind. Yes, I understand you win as a team and you lose as a team but come on…it is Gisele. If Gisele and Tom were to break up, I would probably not believe in love anymore.

1. David & Victoria Beckham – Although it was a toss-up between the Beckham’s and the Brady’s, the Beckham’s won solely on the purpose that I have been involved with this couple since the days of the Spice Girls. I truly admire them. Nothing says you are in a loving and confident relationship like allowing your significant other to pose in their underwear for millions to see.

Looking to Score on Valentine’s Day?

Yes, you guessed it. The second post from the BSB ladies comes just in time for Hallmark holiday of the year, Valentine’s Day. You may be thinking, what does Valentine’s Day and Boston Sports have in common? Absolutely nothing if you already have dinner reservations and flowers picked out. However, if that doesn’t apply to you, I would high tail it to the Garden on Tuesday night to celebrate the right way…with the Bruins. The Bruins are playing the New York Rangers…Going to be a good game, right? Well, I’m not here to talk about the game.

Rather, I am here to provide you the game plan on how to find the most eligible bachelors and bachelorettes while you are at the Garden.

1. Find the Perfect Seat: The Loge Sections 1-22 are prime locations for meeting Mr. or Mrs. Right Now. The right amount of rowdy and fun.
2. Make conversation in the Beer Line: As many of you BSB-ers know, beer lines can be brutal. You want to get your drink on (responsibility) but there is always an 85 year old working the line you are in. This presents the perfect opportunity to make conversation with that special someone.
3. Don’t bash Valentine’s Day: Ladies, this is specifically for you- when the conversation starts-DO NOT BASH VALENTINE’S DAY-you will come off as a bitter girl and no one likes a bitter girl.
4. Facebook and Twitter Updates can wait: Now, we are all guilty of this but no one likes the person playing with their phone. Focus on the game, make conversation but don’t update, unless you are thanking BSB for these great tips. #thankyoubostonsportsblog

Ditch the dinner plans, grab your Bruin’s jersey and head to the Garden to watch at least one Boston team beat New York…too soon?

How To Watch the Super Bowl With Your Girlfriend

Do you immediately start laughing at your girl when she talks football? Don’t flatter yourselves guys. Over 1,000 people were surveyed through an online study conducted by Atlanta Journal-Constitution who confirmed that 73% of women would rather watch the Super Bowl than have sex. Guys on the other hand were split 50/50 when asked which activity they’d prefer on this upcoming Sunday. Ask yourself this- where does my loyalty rest?

Believe it or not, women have started placing Super Bowl bets just as often as men. These bets may not be the standard ones like who will actually win the game, but rather, “Will Madonna play Like a Virgin at Halftime?” “Will Kelly Clarkson mess up the National 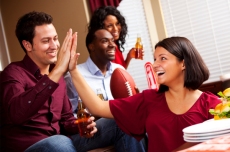 Anthem?” Guys, keep your hundred dollar bets on whether the final score will end in a 3 and a 7, but dish out the extra $5 to go up against your girl.

Competition and hostility are trivial aspects of football that can be expressed in varying ways amongst both males and females. Trust me, your true colors shine when you start screaming every profane word you’ve ever heard in your life in a never ending sentence of vulgarity. Whether you actually do that or not, sporting events such as the Super Bowl are meant to bring us together! So if you’re crushing 30-40 wings or nibbling on Skinny Buffalo Chicken Dip (ladies I suggest the recipe from SarahFit), remember that we’re all in this together- GO PATS!

P.S. Listen up ladies. Do not wear a pink jersey. Do not drink wine. Drink beer only out of a bottle or in a red cup. Do your homework and know the QBs on each team. Do not ask questions during play. Party on!