With Selection Sunday less than 3 weeks away, I thought it would be a good idea to look into the top teams to try to figure out who will be rewarded the #1 seeds in each bracket. So each day this week, I will be putting up a short summary of each team’s top players, remaining schedule, and other projections. 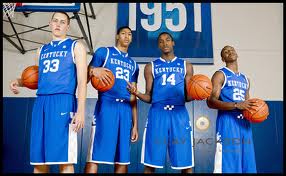 Prediction: Barring some fluke, I do not see the Wildcats losing another game this season. They beat Florida by 20 points two weeks ago, and Anthony Davis and company should be able to win their conference with ease. In fact, the only one close to them in the standings is Florida, and they are 3 games behind.

Super star Freshman Anthony Davis is averaging just shy of 14 PPG, 9.7 RPG, and a huge number of blocks per game at 4.9. He is clearly the best player on this star-studded line up.

Doron Lamb is a Sophomore Guard for the Wildcats. He is averaging 13.8 points and 3.2 rebounds but is a defensive presence on the floor. He has dropped over 20 points in 3 games this season.

Michael Kidd-Gilchrist is a freshman from Jersey who is also very long at 6”7. He is averaging 12 PPG, grabbing 7.7 boards per game and 2.1 assists per game.

Darius Miller is the senior presence on the floor, averaging 9.9 PPG and 2.1 APG, but does so in only 25.2 minutes per game. That is less than any of the other stars on the team.

Freshman Marquis Teague is the last person who will be mentioned. He is a 6”2 Point Guard who puts up 9.6 PPG and dishes out 4.8 APG.

There are not too many teams who will have 6 people that can do what these Wildcats have done. They have lost only one game this season. That was to Indiana, by 1 point, in December. They are surely going to be a #1 seed come March 11th. But knowing the history of Kentucky, most of these players will not be back next season.