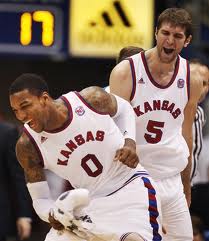 Prediction: Their remaining schedule is no cake walk.  Missouri has already beat them once, by 3 points, even though they lost the other night. Oklahoma State is the only team with a losing record that they play, but even they have beaten Missouri. I think it will be tough but they will most likely receive the #1 seed if they can continue to win.  They have lost against teams that they should not have lost against.

Senior Tyshawn Taylor is a great #2 on the team behind Robinson.  He scores 16.6 PPG, while averaging 5.1 Assists.  He will be a first round draft pick, but most likely a lower one.

Junior Jeff Withey is the surprise this season.  He is a 7-footer who puts in 9.5 PPG while grabbing 6.6 boards. He also has high FG% at 56%. If an NBA team really needs a center that they don’t mind working with, he would not be a bad choice.  He dropped 25 points against Baylor.

Elijah Johnson is yet another Junior guard for the Jayhawks.  He is only 6’4 but contributes his share of points (8.6) and assists (3.7).  He also leads the team in steals with 1.6 per game.