The B’s put an absolute beatdown on the Toronto Maple Leafs last night in more ways than one. Four goals in the first, three in the second and one in the third equaled a snowman and showed the fans that this team may have just got its offense clicking again. Over the last few games each line has been playing well. They are causing turnovers, supporting the puck, and capitalizing on the other team’s mistakes by putting the puck in the net. Rolston is starting to get in sync with Big Z at the point on the powerplay and it is paying dividends. Pouliot and Caron have been playing their asses off lately and both have been showing up on score sheet as a result.

In addition to the scoreboard beatdown, Milan Lucic handed old sparring partner Mike Komisarek one uppercut after another in an all too familiar fashion. It was good to see that 6’4” 240lbs Komisarek is still as soft as he was when he was with Montreal.

Let’s see if the Bruins can keep this thing rolling. Tim Thomas is playing with confidence, the offense may have just lit a spark under itself, and they have a little motivation now with Ottawa seriously in the picture (a wake up call when they passed the Bruins in the standings).

UPDATE: Marty Turco has officially joined the Boston Bruins after being claimed off of waivers. Minutes after the waiver deadline passed, Turco joined the team on the ice for practice, even staying an extra 30 minutes after the team was done to get some extra work in.

The Bruins barely held on to beat the Maple Leafs last night in Toronto. The Bruins had a two goal lead in the 3rd period thanks to young guns Tyler Seguin and Jordan Caron who each netted two goals. However, Toronto pulled within one thanks a Mikhail Grabovski snap shot. In the waning seconds of the game, the Bruins were able to maintain the lead despite a 6 on 4 advantage for Leafs. The effort stopped the two game skid they were on and gave them a much needed win. Thomas had 25 saves on 29 shots, claiming he is on a little bit of a bad luck streak right now. He has definitely not had some bounces go his way; speaking like a Sox fan, let’s hope he gets his bad luck out of the way now, so it’s all good luck for the playoffs.

In other news, the Bruins and GM Peter Chiarelli are not overly optimistic that Marty Turco will join the club. Chiarelli put the odds at 50-50. The reason for this is because Turco has to clear waivers before the Bruins can sign him, and there are other teams out there who would benefit from Turco’s services during the stretch run. Any NHL team has until 12 p.m. ET on Wednesday to put in a claim for Turco. On Monday night, he signed a one-year contract with Boston for a pro-rated salary of $600,000 and had to be placed on the waiver wire because he had only played in Europe this season. 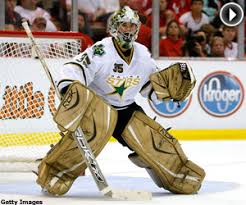 This is a smart move by Peter Chiarelli. After losing Tuukka Rask for 4-6 weeks with a lower abdomen/groin strain the Bruins were left with fourth string Providence goaltender Michael Hutchinson to back up Tim Thomas. I like this signing because it gives the Bruins a veteran, with experience, who won’t be rattled in games down the stretch when Timmy needs a break. Turco is 36 years old and has a career 2.35 goals against average .910 save percentage, primarily with the Dallas Stars. He wasn’t great for the Blackhawks in 2010-2011 (Turco has been playing in Austria this year), but he is only going to be needed as a short-term stop-gap as he is not eligible for the Stanley Cup playoffs because he was acquired after the trade deadline. Turco is expected to join the B’s on Wednesday and I would expect Claude to start him within the week to get him into the flow of the team and the NHL game.

The Bruins had a tough weekend dropping two games the New York squads, each by one goal. The lost a tough one to the Islanders at the Garden as a result of a blown icing call by the officials. I was at the game and it was a clear-cut, textbook, icing that was waved off for inexplicable reasons. This caused the three B’s forwards to pause for just long enough to create a breakout opportunity going the other way resulting in the GWG for the Islanders. Overall, the team played well, but you have to put more pucks in the back of the net against the Isles, considering they scored 12 goals in their previous two games against them. To add insult to injury, the B’s lost Tuukka Rask and Daniel Paille to injury. Definitely not what we need heading into the stretch run. Paille is great on the energy line and PK, and losing Tuukka will make things more difficult for Timmy moving forward because he will see a heavy workload.

After Saturday’s loss the Bruins made their way to Madison Square Garden to face the conference-leading New York Rangers. Despite a horrific start (falling behind 2-0 in the 1st period) the Bruins outplayed the Rangers for most of the game. They put together about 53 strong minutes and 7 poor minutes but that was enough to cost them the game. Thomas wasn’t his best given his atrocious save percentage but in a 7 game series I am confident he can match or outplay Henrik. In fact, I hope we play these guys in the playoffs because I know the B’s can beat them even though it has not played out as well as we could hope in the regular season. Maybe it will give the Rangers some false confidence. 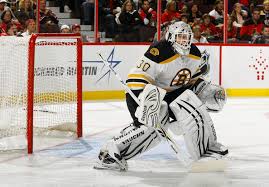 The Bruins look to keep the momentum going tonight vs the lowly 22-24-6 Sabres in Buffalo tonight. Tuukka Rask is getting the start tonight as Timmy has been in net for the past two games. As we move closer to the postseason I would expect to become a familiar pattern with the hope of keeping Thomas healthy and well-rested.

Yesterday President Obama welcomed the 2011 Stanley Cup Champion Boston Bruins into the White House. Only one thing was missing. The 2011 Goaltender of the Year and Stanley Cup Playoffs MVP, Tim Thomas. This wasn’t a Home Alone situation, though. Timmy chose not to attend the prestigious ceremony on grounds of his own beliefs, stating, “The decision to stay away was not about politics or party, as in my opinion both parties are responsible for the situation we are in as a country.” I’m not big into politics or anything remotely close to it so I don’t have a firm stance in those terms. Personally, I’d be ecstatic to meet the President no matter who it is. But that’s just me. Some people have really strong feelings in this regard. I mean, any time the President’s involved it’s going to hit the news, let alone when he’s snubbed by an all-star athlete. So what do you guys think? Was it selfish and not classy of Thomas to bail on the White House trip with his team? Or does the man get away with his right to decline the visit because he’s a brick wall between the pipes?