Do you hate the Brooklyn Nets? Maybe it’s because they still smell like the Dirty Jersey, or even that they have Kris Humphries, or maybe it’s some other reason. But if you like them, you may have to re-evaluate things after this. Deron Williams has hired his own beat reporter to cover him, and only him. Yes, that’s right. Williams thinks that he does not get enough recognition or highlights. The site will be revolved all around him. He says it is only going to be 90% about him, but still, that’s crazy. Kobe tried this before but to a lesser extent. 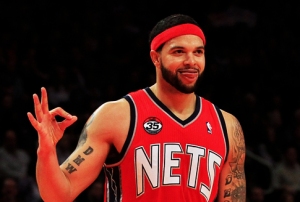 Do you think it is ridiculous that a player would do this? Do you think it shows how self-centered and conceited he is? I think it proves that he cares more about himself than he does his team. He doesn’t care about winning a championship, he wants money and fame. Do you agree?

It wasn’t the best night in Boston last night. The Celtics lost against the Nets by 12, but it should have been a lot more. They outplayed us the entire game and we did not deserve the W. We came out flat. The one spark in the game cost us our best player. Rajon Rondo was ejected along with Humphries and Wallace after he made Humphries look like a little boy after he knocked down KG… 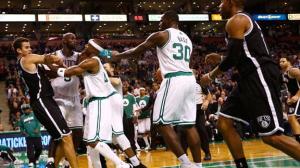 END_OF_DOCUMENT_TOKEN_TO_BE_REPLACED

The Celtics extended their win streak to 3 games after beating the Jazz 98-93 last night at the Garden. Rondo only had 6 points before leaving in the 2nd half with a hurt ankle. They said that he could come back but didn’t want to risk it. He did record 10 assists so he is still in the chase of the record, but did not hit the 11 mark.

Paul Pierce continued to show he can still play with 23 points, including three 3-pointers. Jeff Gr

een stepped up big and put up 16 points in 27 minutes, while Garnett added 11 points, 8 rebounds, and 4 assists (one of which is worth watching if you check out ESPN today). He tossed it behind his back to Barbosa and it looked like he knew he was going to before the ball was even near him.

Speaking of Leandro Barbosa, talk about a great pick up. He hit 6 out of his 8 shots and put up 16 points while recording a game-high +13 points. The weirdest part about this game for me was that Jason Terry didn’t take one 3-pointer. I know it doesn’t matter since we are winning, but we are gonna need some outside shooters when we play bigger teams like the Lakers. The Celtics play the Nets tonight in Brooklyn at 8 p.m.