Boston Beats Dallas: The Boston Celtics came away with a victory against the Dallas Mavericks last night in nail-biting double overtime fashion. The C’s beat the Mavs 117-115 at the Garden, thanks in part to a pair of Courtney Lee free throws in the game’s final seconds.

Lee’s made free-throws sealed the deal for Boston. Had Lee missed both of them, Dallas guard OJ Mayo’s 24 foot 3-pointer at the buzzer would have tied the game and forced a 3rd OT. Instead Mayo’s heroics were too little too late and behind Paul Pierce’s 34 points, 6 rebounds, and 4 steals the Celtics managed to sweat out a win.

Rajon Rondo also turned in a top performance for Boston with a double-double of 16 points and 15 assists. Rondo was a rebound shy of pulling off a triple double with 9 rebounds in the game.

Fun Facts From the Game:With a score in the games first overtime, C’s forward Paul Pierce surpassed 23,000 points for his career. Pierce becomes only the 25th player in NBA history to reach 23,000 points.

Back to Back Wins for Boston:With the win over Dallas, the Celtics are now the winners of two straight games. Boston will look to build off this win, and improve on their 12 and 9 overall record, as they hit the road to face Jeremy Lin, James Harden, and the Houston Rockets this Friday at 8pm from the Toyota Center.

In the past six months the sports world has been overwhelmed with two triumphant stories of individual athletes who defied the odds. The most notable coming from the NFL in Tim Tebow and most recently in the NBA with Jeremy Lin. Each has caused a media frenzy that I don’t think any of us have seen before. Tebow Mania, Bronco’s Savior, Linsanity, Super Lintendo. The list of puns and corny titles go on. But the two “Cinderella” stories have since died down. We all know what happened to Tebow when he stepped foot on the turf at Gillette Stadium in the playoffs and the hype around Jeremy Lin has since settled down, as the Knicks have been on a skid. But once again, 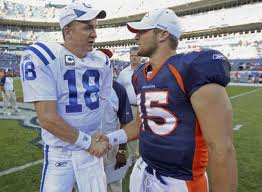 Tebow finds himself in the headlines in a much different way.

At the end of the Bronco’s season, John Elway announced that Tebow would be the team’s starting QB heading into next year. Sorry Timmy, but I don’t exactly see that happening any more. With Peyton Manning now heading to Denver, I think even Tebow knew to start packing his bags. In a way, you gotta feel bad for the guy. Then again, it’s pretty funny. Tebow spent all season winning games in the most unlikely ways, gaining an immense fan base in no time, and redefining the phrase “becoming a household name”. But it has to be rough with all the progress he’s made and what he did for the Denver organization to be put in a position to expectedly get ousted in a heartbeat by Manning. Although painful, I’m sure Tebow won’t even argue with his replacement, I mean who could? Don’t get me wrong, I can’t hate on Tebow. He’s clearly a good guy and he showed he could win (some games) but the Pat’s certainly put him in his place in the playoffs, so no hard feelings. Nothing definite has happened with his place in Denver or potential trade, but I’m sure once things begin panning out as to where he will end up, Tebow will once again be the sole topic of ESPN.

Linsanity is sweeping the nation, no doubt about it. Cliche “Lin” words aside, us here in Boston find ourselves with a soft spot for this guy from the Knicks. Who doesn’t love an underdog story? Even Doc Rivers had kind words for Lin, stating, “It’s a good thing; It’s a good lesson for everyone: If you want some attention, go win.”

Nons wrote an article on Lin yesterday (I know, surprise right?) titled “A New Tebow”, although he never really compared the two. But that’s my point. They shouldn’t be compared. They’re two completely different stories. The sole thing they have in common is that the media is going crazy over them, making them the topic of conversation every three minutes on every sports network in the country. Tebow won two national championships in college. Lin barely made the Harvard squad. Tebow’s form and mechanics in pretty much every aspect of the quarterback position have been in question from day one of his professional career, probably even prior. Lin has a mixture of speed, knowledge, and a court vision that makes him a great point guard. Not to mention a jumper that makes him a threat from the outside, leaving defenders on their toes at all times. You don’t see anyone complimenting Tebow on his skill set at the QB spot. Before last week, no one knew who Lin was. A true underdog. Now, he’s making national, even global headlines in the NBA. As a Boston fan I’m eager to see Lin’s progress moving forward against the likes of Miami and Chicago. And you might want to mark down March 4th on your calendar. Lin and the Knicks are shipping up to Boston.

Well hello again everyone. Sorry I’ve been a little absent this month, and by absent I mean non existent, but the real world is upon me. Don’t worry, I’ll still sprinkle some articles in here and there, but I’ll sadly be the background of BSB as we emerge as one of the leading blogs in our field.

Anyways, back to the topic at hand, there may be a new Tebow among us. Jeremy Lin, the Harvard economics grad and new Knicks sensation, is currently the trend on ESPN and Twitter (see #linsanity). This guy is playing absolutely out of his mind and he’s on a team dominated by two prima donnas. With Melo out, this guy has taken the reigns and has totally overshadowed his only healthy counterpart, Amare Stoudamire. In his first five games, he’s accomplished something that no other player has ever done (average 20+ points and 7+ assists in his first five starts), and oh by the way, this guy is averaging 26.8 ppg and 8.5 assists in the last 6 games, all of which have been wins. In a season that was supposed to be a real breakout year for the Knicks (although I think the last 7 seasons were defined as that, too) it’s incredible to see a guy from the Ivy League put the team on his back.

This guy is solving the Global Debt Crisis by day and hitting game winning tres by night. God shouldn’t create people like this, it’s not fair. Either be incredibly athletic or extremely smart, not both (Shaq and Sir Charles Barkely being the ideal examples here).

Anyway, there has been rumor that this guy is the new Tebow because he is a new sensation who is winning. Floyd Mayweather made some pretty ignorant comments on twitter about Lin, only to be ripped by Spike Lee the next night – who I normally can’t stand but was 100% right. The big difference between Tebow and Lin is the fact that Lin is truly winning these games for his team. Tebow had the crutch of the defense to lean on and The Holy Spirit, meanwhile Lin has an injury riddled Knicks squad and lives in a city ruled by Satin.

Either way, this cat can ball. 6-0 in his first six starts, and he’s playing the same amount of minutes as Kobe and more than Lebron. Jeremy Lin is on the cusp of becoming the new Prince of NY (Jay Z is still the king, common son) and has given hope to the Madison Square Garden faithful.