In honor of game 4 of the Stanley Cup tonight, let’s take a look back in time. Let’s look back at just over 2 years ago when we beat the Canucks 4-0 in game 4. We tied the series at 2 each after this game. Timmy Thomas turned away all 37 shots that he faced. Luongo only had 16 saves in this game. Talk about efficiency on the B’s part. Rich Peverly scored 2 goals. This was probably the last time that he did something good for us.. Marchand and Ryder also scored a goal each.

This was also our first game after Aaron Rome’s cheap ass hit on Horton (see below). They definitely won that game for him, and the series got a lot more physical after that. We absolutely hated the Canucks. Especially after that hit. This is something that was lacking in this year’s finals. Until Monday where there were multiple fights near the end. Hopefully we can play with that same intensity and bring us one more game closer to closing this thing out and bringing the Cup home! Go B’s!

Mondays suck a lot less when you have the Bruins on at night. It’s going to be a big game for sure, and the Bruins must be pumped to play at the Garden again.

The last time we came home for game 3 of the finals, we beat the Canucks 8 to 1. That would be amazing to do again, obviously.

Adam McQuaid told espn that “You run on adrenaline this time of year”, and it’s true. After playing as many games as these guys have, they need every little bit of help they can get. So if you’re going to the game and don’t plan on screaming your heart out, then give the tickets to someone else (preferably me). Let’s just hope the series doesn’t flip flop like the NBA is, and go back and forth. We need to take these two at home! Go Bruins!

I don’t want to jinx anything, but here are a few things that could be in our favor (from ESPN):

It’s no secret that the Blackhawks were the best team in the NHL during the regular season. I mean, they didn’t lose for the first 24 games of the season. They didn’t fall off much after that, losing only 7 games the rest of the season. The playoffs are a lot closer, though. The last time we played the Hawks was almost two years ago when we beat them in a shootout during the regular season. That is hardly an indication of what’s to come. Many writers and analysts have already said that this could be one of the best Cup Finals in a long, long time. Both teams have won the Cup in the past 3 seasons. Here is how the match up:

And now for the playoffs:

What do you think will happen in the series?

I read an interesting article on ESPN earlier about the difference between the way Tuuka Rask is playing during the playoffs this season and the way that Tim Thomas did two years ago when we won the cup. Thomas won the Vezina Trophy and Conn Smythe that season and was clearly the leading factor in why we brought the cup back to Boston. He was phenomenal. But now he left us and we needed to fill those shoes. Tuuka is a lot younger and doing just that.

Through the first 13 games of each year’s playoffs (2011 and 2013), their records are identical, 9 wins, 4 losses. However, and much to my surprise, Tuuka’s numbers are better. Maybe it’s just because Thomas did it first, and now we just expect it from everyone, but I would have thought it would be the other way around. Rask has allowed 2.10 Goals per game and sported a .933 save percentage. Thomas allowed 2.39 Goals and had a .927 save percentage.

Granted, Thomas was a lot more interesting to watch because he would fly out of nowhere and make the save, whereas Rask is typically in the right place. Except when he leaves his net and goes out 10 feet. But either way, we are going to need him to keep playing this well if we want to bring home another cup. Go Bruins!

With Chris Kelly out indefinitely with a broken Tibia, will the Bruins go out and try to make a big time trade before the April 3rd deadline? They have already recalled 22-year old Jordan Caron from Providence for 3 games, and could even play Jay Panalpho (38-years old) a lot more than they have.

Those would be the cheaper options, for sure. However, the B’s have quite a bit of money that they can spend.  They still have $7.6 Million in cap space. That should be more than enough to bring in a proven star.

The problem is, the Bruins don’t have many “stars”. They are such a balanced team and haven’t relied on any one player since Savard went down a few years back. One name that has come up in talks is 35-year old Jarome Iginla of the Calgary Flames. Jarome is a 15 year veteran and former first round draft pick. He has played his whole career with the Flames, and has proved that he can still play at his older age. Last season, Iginla netted 32 goals while adding 35 assists. In his career, Iginla has a total of 523 goals and 569 assists for a total of 1,092 points.

To put that into perspective: Zdeno Chara has played 14 seasons (albeit as a defender) and has only 470 total points. Bergeron has played 8 seasons, but only has 423 points.  Iginla has scored as many as 52 goals in a season and has only had under 25 goals twice in his career. With the Flames sitting outside of the projected playoff bracket, they may be willing to deal for a younger player. Not saying we will go for Jarome, but he has been the only one mentioned so far. They still have plenty of time to figure out a move that they want to make, if any..

The Bruins traveled to Sunrise, Florida yesterday, where hockey should be illegal just because of it’s name. They took on the Panthers and got out to yet another quick lead. Milan Lucic scored his 4th goal of the season 8 minutes in to put the B’s ahead. David Krejci recorded his team high 9th assist. Krejci has been playing spectacular and is the

team leader with 12 points. A little while later, Chara made an unbelievable spin move and backhanded one into the back of the net. He looked like a figure skater on the play, which is hard to believe from someone who is 6”9 without skates. Marchand and Seguin got the assists on that one. The Panthers were able to put in one of their own before the end of the first period.

The Bruins finally scored on the Power Play a few minutes into the 2nd period when Daniel Paille assisted Chris Kelly for his first goal of the season.  Other than that, the game was pretty back and forth. There was no more scoring until Paille scored on an open net with 1 minute left, but it was definitely fun to watch. The Bruins were on a penalty in that last goal and the Panthers pulled their goalie so they scored even though they were playing 4 against 6. That marked the first time this season that Boston has had a 3 goal lead. Milan Lucic made things exciting when he went after a guy who clearly cross-checked him and didn’t get the call, so he was pinned with a 10 minute misconduct penalty for retaliating. Tuuka Rask played well for the Black & Gold with .34 saves. The Bruins improve to 11-2-2 and will take on the Islanders Tuesday night.

The Bruins opened up strong with two quick goals in the first 4 minutes tonight against the Tampa Bay Lightning. Nathan Horton scored his 5th of the season just over a minute in on a dish from Dougie Hamilton. Less than 3 minutes later, Patrice Bergeron recorded his 3rd of the year with an assist from Brad Marchand. About halfway through the 1st, Steven Stamkos scored his 11th of the season on an absolute snipe over the top of Tuuka Rask. 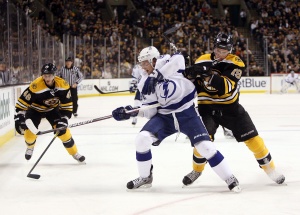 After the first two goals by the Bruins, the game really evened out. Actually, Tampa Bay probably took the upper hand and had many scoring opportunities late in the first and early in the second. The B’s still got their chances though, especially between Seguin and Lucic. Corey Conacher scored for the Bolt with 11 minutes left in the second period to tie the game at 2. Marchand didn’t take a long time after that to score his 9th goal of the season to re-gain the lead.

Nathan Horton scored 3 minutes into the 3rd period with his 6th of the season (2nd on the night). That’s how the game would end. The third period was slightly less exciting but still had it’s moments. The Black and Gold missed a few empty netters at the end. Tuuka Rask finished the game with 23 saves. The Bruins improve to 10-2-2 and will take on the Panthers on Sunday afternoon.

The Bruins will take on the 2-2 Carolina Hurricanes tonight at 7. The Bruins are looking to improve to 4-0-1 on the season. Both teams have scored 2.75 goals per game, while the Bruins have only allowed 2 per game, compared to the 3.25 that the Hurricanes have allowed.  However, we only average 29 shots per game, where they average 39. This is better for our percentages, but tough when we have Anton Khudobin making his first start of the season. He started one game for us last season and only allowed 1 goal while

recording 44 saves. He has only played in 7 career games.

Gregory Cambell, David Krejci, Milan Lucic, Brad Marchand, and Rookie Dougie Hamilton are all tied for the team lead with 3 points. Lucic is the leader with 3 goals and penalty minutes with 17. This fits right in with the Bruins model ever since the won the Cup 2 years ago. There is no clear-cut star on this season. It could have been Savard before he got concussed, but now there is no one. Just a team that’s willing to do whatever it takes to get the W. I love that hockey’s back.

It’s great to have the Bruin’s back, even if it is for a lockout-shortened season. The Bruin’s proved that keeping their team chemistry together over the off season was the right move after not signing any big names. They opened up the season versus the Rangers on Friday, taking t

hat game 3-1. Then, they took on the Jets on Monday afternoon, and won in a shootout.

Tuuka Rask has only allowed two goals and the B’s are playing like they typically do, as a team. Everyone either has 1 point or 0 so far. The Black and Gold will take on the Rangers again on Wednesday night and then the Islanders on Friday.

Not much good news in the NHL this season, but there is one thing that Bruin’s fans can be happy about. Nathan Horton is now healthy and will play if and when the season starts. He last played on January 22nd after his 2nd concussion in just 7 months. His first concussion came against the Canucks in the 2011 Stanley Cup Finals. He scored 17 goals and had 15 assists last season before getting sidelined in January.

This will be big for the Bruins who struggled to score at the end of last season. Horton is a proven scorer with a 30+ goal season and many 20+ goal seasons. Can’t wait for the black and gold to get started again.