The Bruins traveled to Sunrise, Florida yesterday, where hockey should be illegal just because of it’s name. They took on the Panthers and got out to yet another quick lead. Milan Lucic scored his 4th goal of the season 8 minutes in to put the B’s ahead. David Krejci recorded his team high 9th assist. Krejci has been playing spectacular and is the 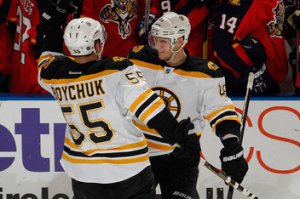 team leader with 12 points. A little while later, Chara made an unbelievable spin move and backhanded one into the back of the net. He looked like a figure skater on the play, which is hard to believe from someone who is 6”9 without skates. Marchand and Seguin got the assists on that one. The Panthers were able to put in one of their own before the end of the first period.

The Bruins finally scored on the Power Play a few minutes into the 2nd period when Daniel Paille assisted Chris Kelly for his first goal of the season.  Other than that, the game was pretty back and forth. There was no more scoring until Paille scored on an open net with 1 minute left, but it was definitely fun to watch. The Bruins were on a penalty in that last goal and the Panthers pulled their goalie so they scored even though they were playing 4 against 6. That marked the first time this season that Boston has had a 3 goal lead. Milan Lucic made things exciting when he went after a guy who clearly cross-checked him and didn’t get the call, so he was pinned with a 10 minute misconduct penalty for retaliating. Tuuka Rask played well for the Black & Gold with .34 saves. The Bruins improve to 11-2-2 and will take on the Islanders Tuesday night.