Alright, let me start this post out by saying that this is not my prediction for the Superbowl. As good as both teams are, I just don’t see them getting past some of the more balanced teams in the league. With that being said, I would love to see this matchup come February because it has the ingredients to create one of the most delicious offensive showdowns in history. Looking at the figureheads of both squads, Brady and Brees, these guys are out of their minds this year. With both teams really using their entire wide-receiving core because each team lacks a Randy Moss / Calvin Johnson like superstar, it is truly incredible that these guys are both (yes, both) on pace to break the record for yards in a season. It’s a testament to their preparation and dedication to the game (if you watched the post-game last night, you could see Steve Young draw full as he described Brees). With that being said, this Superbowl matchup would be an all out slugfest. I legit think the over-under might be 409. With neither team possessing much of a secondary, players like Sproles and the super tight-end that is Gronkandez stepping up, the offensive display will be a masterpiece. Watching two of the best in the history of the game battle it out is something that I am undoubtedly looking forward to. That is unless Rogers continues to perform the same way he has in the last 11 games. In which case it will go down as the greatest QB performance ever (yes, even better than ’08 Brady). 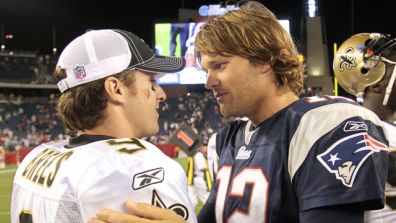 2 thoughts on “Saints vs. Pats Superbowl?”