Today we will take a look at the defensive lines of the Giants and the Patriots, I know this might be the best part of the Patriots defense (not saying much), but I think you all know where this one is going. 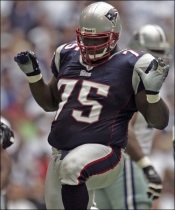 The Giants have arguably the best pass rush in the whole NFL. There isn’t a team that can pressure the quarterback without blitzing the way the Giants can. I hate bringing it up as much as the next guy; but when the Patriots matched up against the Giants last time in the Super Bowl their offensive line got exposed by the rush of the Giants. On many passing downs the Giants will switch off D-Tackle Linval Joseph and they will go with a four man front of Umenyiora, Tuck, Pierre-Paul, and Kiwanuka. The fact that the Giants pass defense is as bad as it is when they often times have no need to blitz and can keep many players back in coverage really shows how inept their secondary is. A combination like that possesses more speed up front than any D-Line in the NFL. The bright spot of their defensive line has to be Jason Pierre-Paul. He leads the team with 16.5 sacks so far this season. Osi Umenyiora isn’t to bad himself; he’s only played in nine games this year and has still recorded 9 sacks. Expect Brady to make many changes at the line of scrimmage based on the personnel the Giants send out there. This game is going to come down to the success both sides have in the trenches.

The Patriots defensive line is very solid. They have a big presence in the middle with Big Vince clogging up all the running holes, and he even showed last week he could get after the quarterback as well. The loss of Andre Carter certainly didn’t help the pass rush, but veteran Mark Anderson has stepped right in and recorded 10 sacks this season. Like many positions on this team, the Patriots have a constant rotation on the D-Line. Kyle Love, Brandon Deadrick, Shaun Ellis and Gerard Warren always move in and out of the game. You have to be confident the Patriots run defense shouldn’t be the main issue against a team that often times forgets they have a running back. Overall the Patriots defensive line looks solid and should be able to get some pressure on Eli.