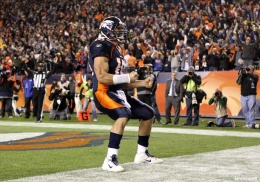 Needless to say, there were some pretty incredible tweets/status updates about Tebow yesterday. One in particular I found pretty solid was from a Jewish kid: “If the Broncos win the Superbowl, I’ll debate becoming a Christian.” However, with that being said, I’m not going to post about how much a winner Tebow is – at this point it’s a no brainer. Nor how much he sounds like he’s 12 when he does a post game interview – seriously though if he says “believe” one more time I might dropkick him. Actually, I’m going to talk about raw stats on this one. There is still a heated debate as to the success of Tim Tebow in the quarterback position; even Brian Urlacher made the comment last night that he was a “Good running back.” The CEO of BSB, none other than Jimmy Tully himself, enlightened me with some pretty interesting statistics that were featured on ESPN back in November, and I did some more research of my own to compare Tim Tebow and the greatest Denver Bronco in history, John Elway. In Elway’s rookie season, he amassed a 4-6 record in 10 starts, threw for 1600 yards and change, 7TDS, 14 INTs and had an abysmal 52% QB rating. In Tebow’s coming out party, he’s 7-1 in 8 starts, has thrown for 1300, 11TDs, 2INTs and boasts an 83.9 passer rating. This also does not account for Tebow’s rushing skills, which if you could have guessed absolutely demolish Elway’s. I know that it is difficult to compare these two individuals, as Elway may have had more “Raw QB Talent,” but I think these numbers surprise even the biggest Tebow critic. The whole nation is rallying around this guy. Couple that with his will to win and his drive to improve? I like the sound of that. 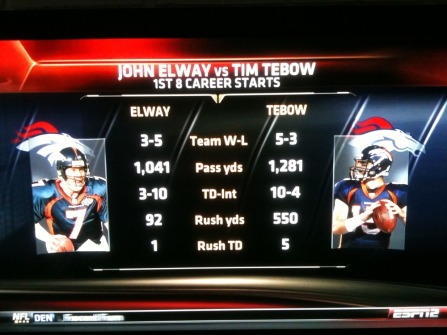 2 thoughts on “Tebow vs. A Bronco Legend”