There is a rumor going around that the Los Angeles Clippers are very interested in obtaining Kevin Garnett to help them in a playoff run. With KG’s experience, tenacity, and outside jumpers, who wouldn’t want him on their team? He is still a solid player, even if he is just a fraction of his former self. It is great that Garnett always says he wants to retire a 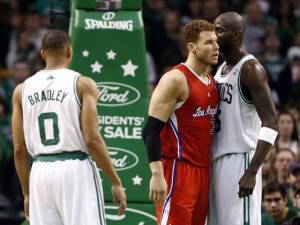 Celtic, and I think he should too, but if it is between trading him or Pierce, I’m letting go of Garnett. Pierce got stabbed a bunch of times, had to play alongside some of the worst Celtics ever (i.e. Antoine Walker after his “prime”), and stuck with the team throughout their down years. He holds many records in this storied franchise and I think he deserves to stay. But I digress..

It’s hard to keep Garnett with the season we are having. Yes, we have been playing a lot better since Rondo went down, but before that, it hardly seemed worth the two year, $23.5 million deal that he still has after this season. However, for what they are offering, at least what is rumored, is to trade him for Caron Butler (10 year veteran with 15.7 PPG in his career, most of which occurred a few years back), and 2nd year point guard Eric Bledsoe, who the Clippers are very high on, it is not worth it. Bledsoe is averaging just over 9 points a game this season, playing behind Chris Paul when he was healthy.

Danny Ainge went on the record saying that he really hasn’t talked about moves, but will take a wait-and-see mentality before the trade deadline on February 21. Anyways, KG has a no-trade clause in his new contract, and can veto any trade that we try to do. That being said, do you think he would go? In my mind, the Clippers have a lot better of a chance of winning than we do. However, he has been the harshest since the Ray Allen-to-Miami signing. Would it make him a hypocrite? What do you think?

3 thoughts on “Garnett Going Away?”