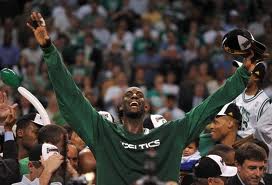 Although he may have lost a step or two in the past few years, the big ticket can still change the game with his unstoppable mid-range jump shot and defense. I’m aware his defense hasn’t been as great, but he is still one of the smartest guys on the court. The only problem I have had with KG is his lack of rebounding, other than in the playoffs. He averages just over 8 per game, but when he was in his prime in Minnesota, he averaged over 13. Rebounding has been a big reason why we have been losing over the past few years, especially on the offensive glass.  I gotta admit though, it was nice having him start all 60 games during the regular season.
Garnett was recently ranked #21 on ESPN.com for top NBA players. He was 22 last year.

Doc has said that KG will be the starting Center so that Brandon Bass can play the Power Forward position. He said KG will do whatever it takes to win, even though some have said he dislikes that position. I’m sure he won’t mind as long as he can get another ring.

KG’s stats since he joined the Green and White are below: