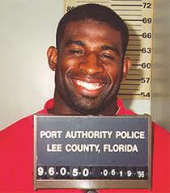 Deion Sanders is the man. Enough Said.  But in case you don’t know why, let me elaborate.  Deion Sanders came out the other day and announced to the world the following:

“Pilar (his wife) and I have decided to end our marriage and move on to the next phase of our individual lives with mutual respect… We arrived at this decision prayerfully and carefully in order to be able to pursue what is in both of our best personal interests.”

Just one problem, he forgot to inform his wife first.  She was under the impression that Deion and her gold-digging self would work things out.  However, he decided to become a divorcee for the second time and test out his game on the market.  I’m sure he will do fine for himself.