The B’s have been taking a lot of heat for a team that’s sitting in first place of their division heading into the final week of the season. And I’ll be the first to say that I’ve been right there throwing stones with the rest of the angry mob. So why are we complaining? Besides our Bostonian expectation of win it all or bust, it’s obvious that the Bruins just aren’t playing to their full potential. Come playoff time, the fumes we’ve 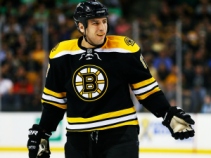 been running on aren’t going to be enough to make a legitimate run at the Cup.

The sense of urgency and our ability to score has just been lacking, among other things. One of which being Milan Lucic. I love Looch, but there’s no denying his metaphorical absence. The Looch of old has been nowhere to be found on the ice this year. Lucic used to be our enforcer. Would anyone call him that right now? No. A lot of people say he’s gone soft since becoming a father, but I’m not buying it. Regardless, the Lucic we’ve grown accustom to over the years needs to return if the B’s want to win the Cup. When Milan Lucic is playing Milan Lucic hockey, the Bruins are playing Boston Bruin’s Hockey, the kind of hockey that won us a Stanley Cup in 2011.

As much as we are all complaining, things aren’t all bad. Although we are in first place, the B’s just need to pick up some momentum heading down the home stretch. And I think that starts with Looch. So here are a few throwbacks that might help build some confidence in the Milan Lucic we all know and love, so Lord Stanley can be returned to its rightful home in Beantown.