Now that Nike has officially taken over the reigns as the apparel provider for the NFL from Reebok, some stars have been seen altering their jerseys. RGIII was the first to do so when he drew the letter “H” over the infamous Nike “Swoosh”. After he was spoken to, he decided just to wear another shirt over it to cover it up. He was not fined. 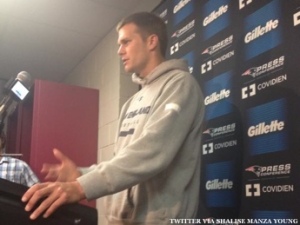 weekly press conference on Wednesday. Tom was sporting a Gray sweatshirt and had a piece of white tape over the Nike symbol on his left sleeve. Brady has an exclusive contract with Under Armour.  I’m sure there will be others that are openly trying to avoid any situation with the Mega-Company based out of Oregon.