Being a Boston-based sports blog, how could we not touch on the whole Welker situation? I didn’t want to and put it off because, frankly, I’m indifferent about it. My general essence over this ordeal can be summed up by one word, “meh”. I mean we clearly had this coming. As much as I wanted Wes to stay, this was inevitable after how things have been panning out over the last few years. You can argue that he chokes in the big game situations, but the guy put up crazy numbers for us and left it all on the field. I’m not going to blame him, or the Pats for that matter. The NFL is a business. Belichick, Kraft, and the front office made a business move that they feel made sense to better their business. Granted, letting him go to Denver wasn’t ideal for us in New England, this isn’t the first time the Pats have made risky moves in terms of signing, or not signing, a big player. Also, keep in mind Danny Amendola isn’t some scrub. The guy can play. Oh and in case you forgot, Brady will still be the one throwing the ball to him. I don’t know about you but the way the Patriots have completely dominated over the last decade, and that’s not an opinion, I think I can safely put my trust in Bill and company to make the right offseason moves for the team. There’s always a plan. With that said, will we miss Wes Welker? Of course. You haven’t watched a single Pats game over the last five years if you say different. Just how much though, is the question? Only time will tell. 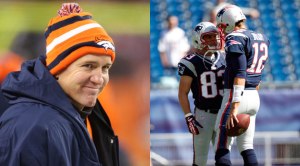