The Bruins have traded Goaltender Tim Thomas to the New York Islanders for a 2014 or 2015 second-round pick. That part of it will be decided down the road. Tim Thomas is a

two-time Vezina Trophy winner, which is given to the best Goalie in the league each year. Thomas was also the MVP of the Stanley Cup finals two years ago when we won it.

Since Tim Thomas took the year off to spend more time with his family, the Bruins suspended him. He had no intentions on coming back to play this season, and at 38 years old, who knows if he will ever be back. By completing this trade, the Bruins were able to create a lot more cap room, while the Islanders, were able to use his remaining one year contract towards their cap floor, which they were well below before this. Even if Thomas doesn’t report, they will still be able to have him on the books, but won’t h 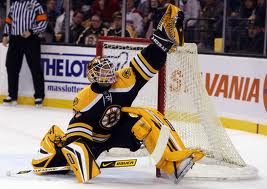 ave to pay him. It’s a win for everybody involved.

Everyone around here loves Timmy, but at the end of the day, it’s still a business. I would rather have them give up someone who won’t play than a valuable asset that reports day in and day out. Tuuka Rask has taken over between the pipes and is playing great. Rask is 6-1-1 with a 1.97 GAA and a .922 Save Percentage. The Bruins will take on the Tampa Bay Lightning on Saturday afternoon.