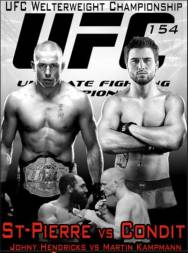 UFC 154 will be held this Saturday November 17th in Montreal, Canada and will feature one of MMA’s most recognized fighters. Welterweight champion George “Rush” St-Pierre will be making his highly anticipated return to the octagon to face welterweight interim champion Carlos “Natural Born Killer” Condit in an Ultimate Fighting Championship event.

Tale of the Tape:

Just at a glance it appears on paper that these two men are surprisingly similar, almost carbon copies of one another stat-wise (Condit does have St-Pierre on Height by 3 inches and MMA Record 28-5 to GSP’s 22-2). However, these next numbers will separate these two prime fighters a bit more.

While Condit is technically undefeated in title fights, he’s only had one UFC title bout, and has only fought in six UFC contests going 5-1. Compare those numbers to GSP’ 9 and 2 UFC title bout record and his 16-2 UFC contest record, and it is clear that St-Pierre is the more decorated fighter in this one. 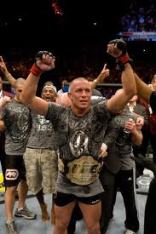 Breakdown of the Brawl: George St-Pierre is highly regarded as one of the best pound for pound fighters in the MMA across the boards. He is a technician in the octagon and always gives opposing fighters fits with his balanced approach. He can beat you at every angle, whether it’s leg kicks to the head, or a counter jab to the face and his takedown defense is nearly flawless. However, there’s one weakness, his ground game. GSP can be vulnerable to ground-and-pound guys like UFC Legend Matt Hughes, who defeated GSP in his first UFC title match (Hughes won by submission with an arm bar). 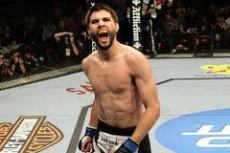 Condit on the other hand focuses more on utilizing his deadly leg kicks and flying knee attacks to wreak havoc on his opponents. Condit also has a solid ground game, using a mixture of submissions and ground-and-pound techniques to finish his opponents. Condit will have to try and throw GSP off of his normally well balanced fighting rhythm to have a chance at the title.

Unanimous Decision: I predict this fight to be “as good as advertised” for UFC fans and MMA fans alike. This fight brings a lot to the table for both fighters, as GSP is coming back from an ACL injury that prevented this fight from happening earlier last year. St-Pierre will look to prove he’s back and better than ever. While Condit will try and use this fight as proof that he’s a force to be reckoned with in the welterweight division and propel himself into a piece of UFC history.

I see this bout going about 4 rounds with George St-Pierre defeating Condit by way of knockout as GSP successfully defends his title for a 7th time and becomes the undisputed welterweight champion of the world.