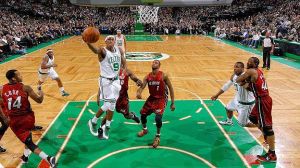 Definitely going to be a fun game to watch, with the exception of the opening ceremony. They are the ones that knocked us out last year and the whole city (and probably most of the nation), is hoping that the Heat lose horribly. Let’s go Celtics!