Here’s a new addition to the Boston Sports Blog…Throwback Thursdays. Each Thursday we’ll post a few historic events in Boston sports or other interesting events that occurred at this time years ago. Enjoy. 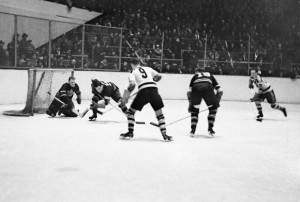 1939 – Boston Bruins won the Prince of Wales Trophy, clinching the NHL regular season championship. Marked the first time the trophy was awarded for this reason.

1954 – NBA raised the basket from 10 ft to 12 ft for an exhibition game between the Minneapolis Lakers and the Milwaukee Hawks.

1955 – Baseball commissioner Ford Frick said that he was in favor of legalizing the classic spitball.

1982 – The NCAA college basketball tournament selections were televised for the first time.

And why not use this post to give a little old school tribute to the B’s in the video below.