The Bruins got a huge 4-3 OT victory vs. a solid New Jersey Devils team at the garden last night. David Krejci has three of the four Bruins goals last night after only two goals in his previous thirteen games. The sudden spark might have been a result of a Julien lineup switch that returned Krejci back to his center position and paired with Tyler Seguin. I’d say that worked out well. Krejci comes up with a hat trick on five shots and Seguin buried the other goal with a snipe and also added an assist. If this new pairing can generate some much-needed offense for the Bruins it will be huge as the team gets ready for the stretch run. 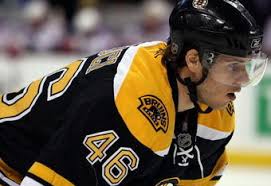 Krejci has had an up and down, boom or bust type of year. He has been working hard, but sometimes he just doesn’t play with the confidence that should play with and it affects his performance on the ice. When plays with swag, he makes dazzling passes and his linemates always benefit from that. Krejci does seem to come up big in important moments (like the playoffs) so maybe now that we are starting to approach the end of season he will improve his consistency, which is going to help Seguin’s production (assuming they stay together) and help the Bruin’s skill players put more crooked numbers on the scoreboard.