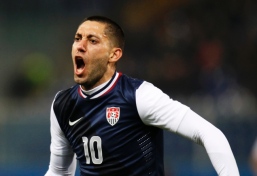 The USA came out with a 1-0 victory over the Italian side today for the first time in the United States history. Clint Dempsey scored the game winner in the 55th minute after Jozy Altidore took down a cross from Fabian Johnson and laid it off for Dempsey to slot it under two Italian players in the bottom left corner.  The goal was Dempsey’s 25th career goal for the national team and one of his biggest all time. He is the 4th all team leading goal scorer for the United States. But while Dempsey is going to get all the praise, Tim Howard showed why he is one of the world’s most respected goalkeepers. He kept the United States in it in the first half with his big saves, and made a few more late as the Italian side never stopped pressing. He had seven saves overall.

The United States looked the best they have looked in the Jurgen Klinsman era. They were tight as a group defensively and put together passes better than they have in any other game thus far. A lot of credit goes out to Michael Bradley and Maurice Edu for holding down the middle of the field and controlling play. Andrea Pirlo is a master with the ball and found time to pick out his players, but Bradley and Edu played as well as you can expect. Bradley especially came up with big tackle after big tackle and proved his worth to Jürgen in the middle. Jonathan Spector also had a huge game after he came on as a substitute for Fabian Johnson in the 77th minute. He got in the way of shot after shot of the Italians and came up with a few more crucial tackles. Jozy played extremely well tonight as a hold up player and Terrance Boyd made the first appearance of what will hopefully be many more.

Italy has to be frustrated as they were caught offside 9 times by the referees. They also have to be kicking themselves because they also had 19 shots during the game, 8 corner kicks, and over 60% of time of possession. Sebastian Govinco was extremely dangerous to the United States when he wasn’t being caught offside as he kept using his quickness to get behind the defense.