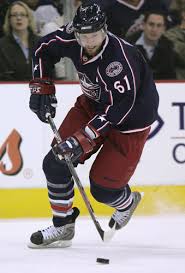 rtunately, I couldn’t catch the game last night but the Bruins did pull out a solid 4-2 victory against one of the better home teams in the NHL. Marchand got on the board with two goals in the game scoring 2:29 into the first. It’s good to see this team have some success on the scoreboard because as of late they have been weak in the goal-scoring department. It doesn’t look like Nathan Horton is coming back any time soon. The Rick Nash trade rumors are starting to swirl and I would love to see the big goal-scorer in a Bruins sweater, but at what cost? He is a special player and an elite goal scorer (and only 27 years old) but he will command at least Tuukka Rask and top D prospect Dougie Hamilton. The Bruins play the Sabres tomorrow night.