There’s not much to talk about concerning the Bruins today. They got smoked the other night. Ryan Miller played great, Tuukka Rask did not, simple enough. 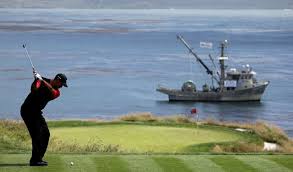 Switching gears, Tiger makes his 2012 U.S. debut this weekend at the AT&T Pebble Beach Pro-Am in California. This is a great event on the Tour because you get to see Chris Berman and other celebrities make fools of themselves on the course, making us feel better about ourselves. Tiger played well last week at the Abu Dhabi tourney in the United Arab Emirates and he looks to have regained some of his old form. As of this post, he is -4 through 12 holes, 4 shots behind the leader. I personally think Tiger is going to come back strong this year (his swing mechanics are 100% better) and I am going to predict that he will win the green jacket at the Masters in April. You know he will be confident, but now he will have to compete with young guns like Martin Kaymer and Rory McIlroy who have emerged (among others) as legitimate competitors in major tournaments.