At this point I don’t think anyone knows what to say about the Celtics. Two weeks ago they were heading straight to the grave. But maybe we spoke too soon. Showing signs of life, the C’s picked up their third straight win last night, beating the Magic 91-83 in dramatic 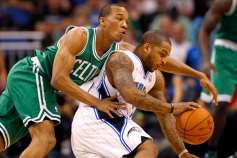 fashion. With Pierce leading the way, the Celtics overcame a 27 point deficit to hand the Magic an even more embarrassing loss than earlier this week’s 31 point massacre. E’Twaun Moore was huge off the bench, putting in 16 of his own, including a clutch three pointer down the stretch. He’s been my pick since day one. The kid has a big future in the NBA, just give him some time to develop. Oh, and in case you forgot, this turnaround has been without Rondo and Allen, making it even more confusing as to what’s going on with the Celts! By the way, congrats to Ray and his wife for welcoming in their fourth son, Wystan Ryan Allen, Wednesday night.

Anyways, the team has talent. That’s been obvious since day one. The surprise came when the talent didn’t mesh during games. The Celts have showed signs of brilliance, but seemed to struggle in finishing games out down the stretch. Granted, digging yourself a 27 point hole isn’t great either, but have they turned it around? Two weeks ago they would have fought back to within a few points, had the momentum on their side, and then with 5 minutes left let the fire go out and lose by double digits, letting us all down. We knew they were a better team than they were showing us. It’s still early in the short season but if anything, the past three games have given hope to Celtics fans. Maybe the flame is still burning on Causeway Street.