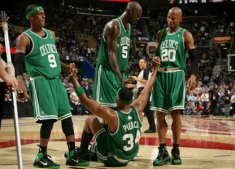 Tonight the C’s turn over a new leaf on this young, yet disappointing season. Home opener at the garden against another winless team in the Detroit Pistons, hopefully the return of Pierce, and according to multiple sources, the introduction of Mickael Pietrus in a Celtics uniform. You best believe the garden will be electric. Anything short of a commanding win is unacceptable. The biggest IF is Pierce, though. Earlier this week Doc noted today as the earliest Pierce would play so let’s hope he’s ready. Sasha just isn’t cutting it as Pierce. In the three starts in Pierce’s place, Sasha’s averaging 4 points and 1.7 rebounds, slightly lower numbers than we’d expect out of Pierce. If all goes well, we’ll see him out on the floor tonight. Regardless, Rondo needs to continue taking control of the offense. Wednesday night we saw a different Rondo than the hustle and aggressiveness that came with the first two losses. If Rondo can be aggressive on the offensive side, as he always is on defense, then it’ll open up the floor for the rest of the team to step up as well. A lot of IFs in Boston tonight for sure, but don’t count out the Celts just yet.

1 thought on “C’s Look to Bounce Back”