Just like everyone else, I’m sick and tired of all the lockout nonsense. I’ve officially hopped off the “hopeful” band wagon and moved onto the hopeless one. With the reality of not having NBA games this winter, you have to wonder if it’s the end of the road for the Big Three. It kills me to even touch on this subject, but both KG and Ray Allen aren’t signed on for the 2012-13 season. That has to set off an alarm for Celts fans. We’ve become the “small-window” team when it comes to competing for Banner #18, and that window is closing. It hurts to see the potential end to something that has been so great for the city of Boston. I guess now all you can do is keep your fingers crossed. 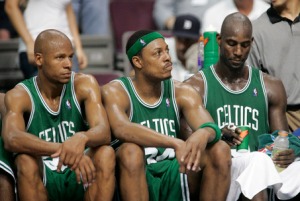 1 thought on “End of the Road”